BTNeanderthal is a full-time Diablo 2 content creator that has been streaming since 2016. He holds a variety of accolades in both modded and un-modded D2, including a current world-record Paladin speedrun. He has, on more than one occasion, been the first to attain max level in specific categories, and he has had the tenacity and techniques to acquire exceptionally rare and valuable items.

The Chaos Sanctuary is the best overall area to farm in Diablo 2. It not only has Diablo - The Lord of Terror himself, but also many bosses which grant large amounts of Experience and loot such as Unique and Set Items, Runes, and Bases! Nightmare difficulty has its purposes for Experience and character progression, but Hell is the primary focus. Hell in this area is extremely challenging, and you will be punished for being unprepared such as lacking Resistances, especially Fire, and overall character power!

The Chaos Sanctuary is a great source for everything in the game including Experience, Runes, Bases, Set and Unique Items. It's also quickly navigated, with the River of Flame Waypoint being only a few teleports away. Diablo is the only monster in the game that drops the Burning Essence of Terror which is 1 of the 4 Essences required to make a Token of Absolution to respec your Character. The Chaos Sanctuary has a static layout with consistent Elite spawns, making it easy to memorize and navigate. The Chaos Sanctuary also provides unique challenges that help you become a better player, like learning to kite monsters, dealing with immunities, dodging projectiles, and avoiding dangerous Curses and Auras.

Here are some examples of what you can find in Hell. Check out our drop calculator for all possible drops.

Note: Diablo, Infector of Souls, Lord De Seis, and Grand Vizier of Chaos cannot drop all the items in the game like the other randomly spawning Elites can due to their Treasure Class restriction. To say this another way, it is more valuable to kill the Elites in The Chaos Sanctuary rather than the Bosses for extremely rare items… who would’ve guessed that?!

The Chaos Sanctuary is one of the best places to gain Experience. A solid strategy that works until ~Level 97 is to kill all the Elites and their Minions which grant large amounts of Experience. The higher the Player Count, the better.

At Level 97 and above, Diablo becomes a main focus for Experience gain due to his high monster level (94). He is 1 of 3 enemies in the game that grant significant Experience, with Nihlathak (95) and Baal (99) being the others. Typically, this strategy has one person with high mobility make a Town Portal at the star in Chaos Sanctuary and immediately clear out a Seal Boss, while 2 other high-level players clear the other Seal Bosses to spawn Diablo as fast as possible. Due to the way that Experience works, Players 7 with a maximum of 3 actual players in that area is the best for this strategy. Read our detailed post on Experience for more information.

How do I find Chaos Sanctuary & Diablo?

The River of Flame is right next to The Chaos Sanctuary. Travel to the top right of your screen past Hadriel and past the bridge.

The Chaos Sanctuary has a cross-like shape and special mechanics that include 5 Seals and 3 Seal Bosses. When all 5 Seals are opened and all 3 Seal Bosses are dead, Diablo spawns at the center star of The Chaos Sanctuary. There are also Oblivion Knights that cast these Curses on you: Amplify Damage, Decrepify, Lifetap, Lower Resist, and Weaken.

On the left side of Chaos Sanctuary, there are 2 possible layouts each containing 2 Seals. The green circle in example layouts indicate which Seal spawns the Seal Boss, Grand Vizier of Chaos. He spawns nearby and is always Extra Strong and Fire Enchanted. 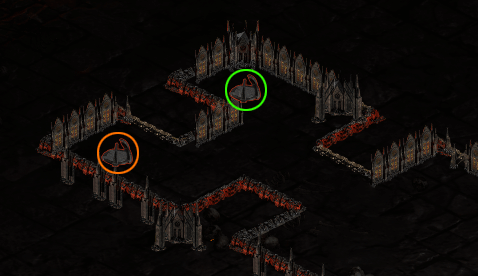 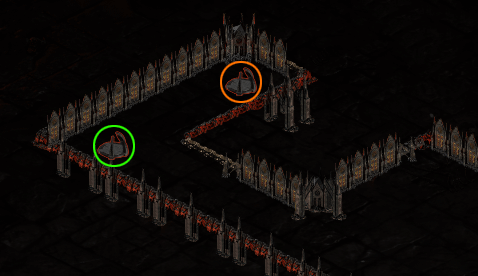 On the top side of Chaos Sanctuary there are 2 layouts and 1 Seal. When this Seal is opened, Lord De Seis, spawns nearby. He always Extra Strong and Aura Enchanted. Initially the Aura is Fanaticism, however, if you leave him alone long enough he might change his Aura. 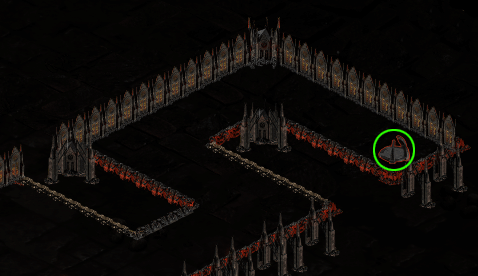 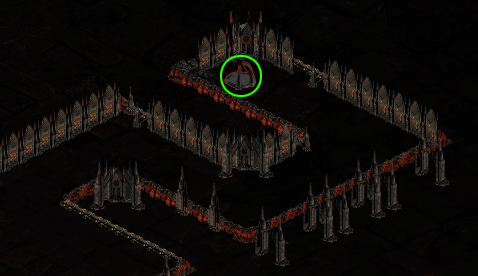 On the bottom right side of Chaos Sanctuary there are 2 layouts and 2 Seals. When the West most Seal is opened, the Infector of Souls spawns nearby. He is always Extra Fast with Spectral Hit. 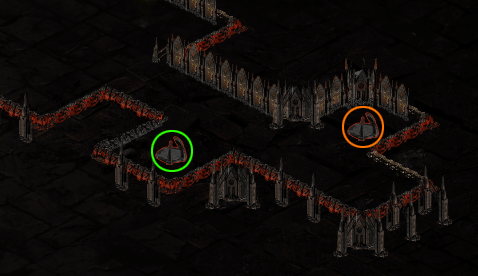 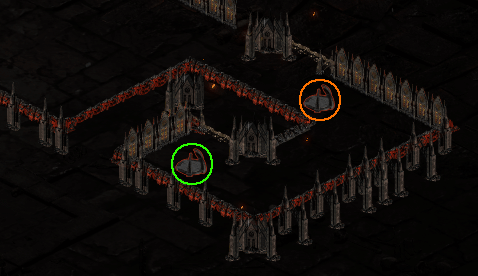 When all Seals are popped with all Seal Bosses dead, the screen goes red and Diablo himself calls out, "Not even death can save you from me." After a few moments, Diablo always spawns in the center star of The Chaos Sanctuary.

On the right side of The Chaos Sanctuary, you have 2 different layouts. You can abuse the J shaped tile with ranged builds by attacking Infector of Souls over the moat without him being able to hit you.

You can make Diablo waste actions during his fight by placing a Town Portal next to him and stepping back, making him summon bone prison on it over and over as long as there is no active bone prison on the Town Portal.

While waiting for Diablo to spawn in the center of The Chaos Sanctuary, you can pre-cast Blessed Hammer in specific positions to put those hammers on the field. When Diablo actually spawns in, you can jump on him too and effectively be hitting him twice as hard. This also works for Skills that linger for a while, such as Blizzard or Meteor. 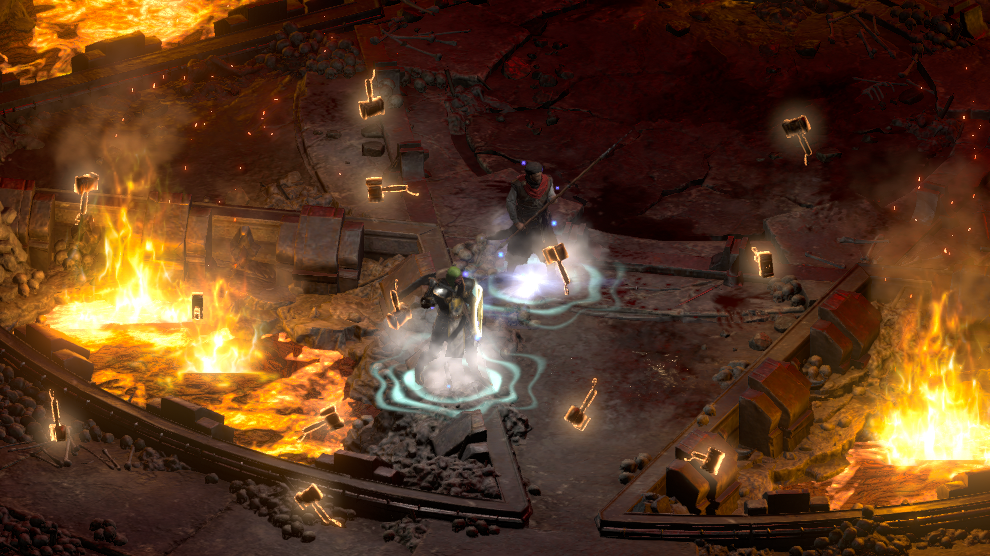 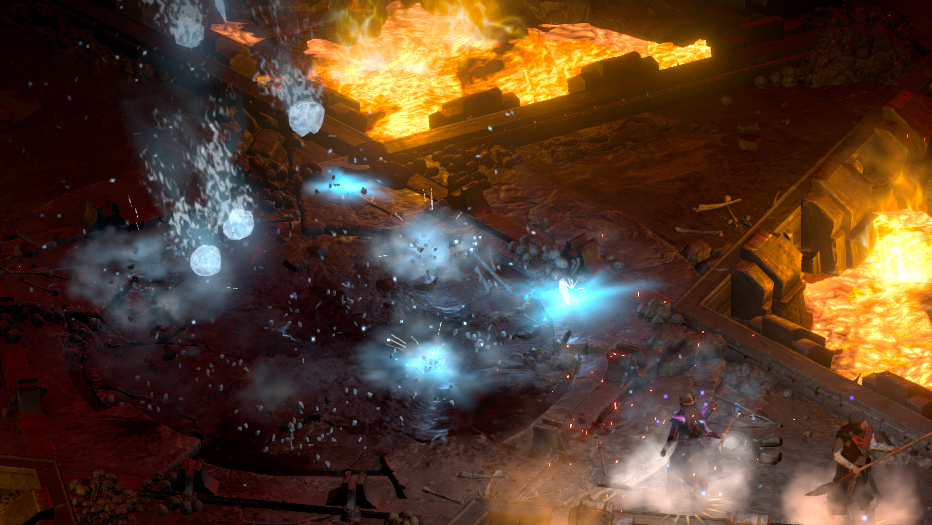 The Chaos Sanctuary has a unique mechanic referred to as "Seal Popping." After all the Seals are opened and Seal Bosses are dead, all the monsters are killed throughout this zone and Diablo spawns in afterward. We can abuse this process to our advantage to get more loot. Seal Popping has a few mechanics to understand to pull off properly.

While every Class can clear The Chaos Sanctuary, some do it better than others. The Paladin has a big advantage over other Classes due to his Blessed Hammer Skill, and its additional damage to both Demons and Undead. Don't farm this area unless you're ready for the challenge it holds.