Perciculum has been playing lost ark since the second Korean CBT. As a content creator his main focus is on making PvE Raid guides. He is also the guild and community lead of "T-Party" and participated in countless guild vs guild battles as a shot caller. His favourite classes are Arcana, Gunlancer, Artillerist and Wardancer.

The Guild System in Lost Ark is fairly complex. You start by creating or joining a guild, then you continue to make Contribution, clearing Guild Quests, researching, participating in guild activities and competing against other guilds.

Guild vs Guild (GvG) and

Guild vs Environment (GvE) help you to work towards a goal as a guild and earn your well deserved reward in the form of Sylmael Bloodstone. Exchange it for crucial upgrade materials that help you to push your gear even further!

Benefits of a Guild 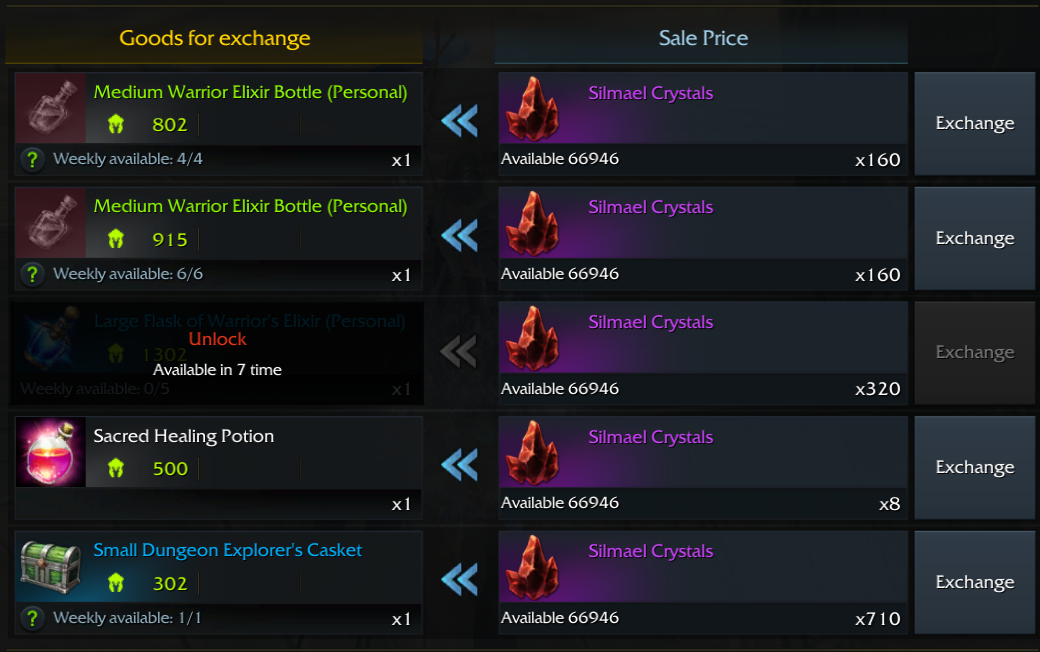 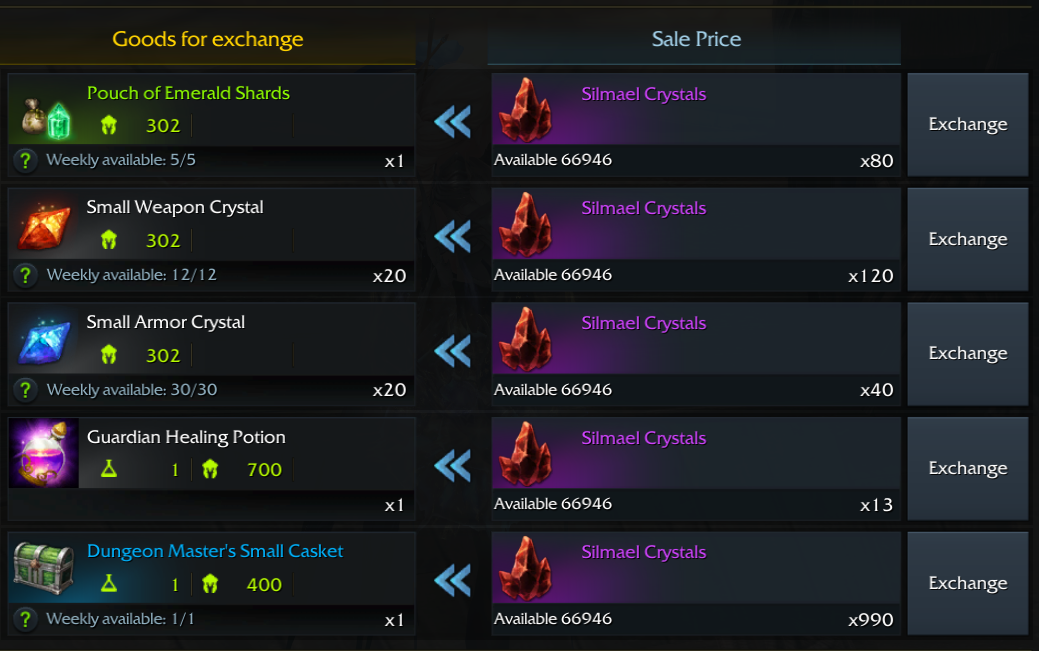 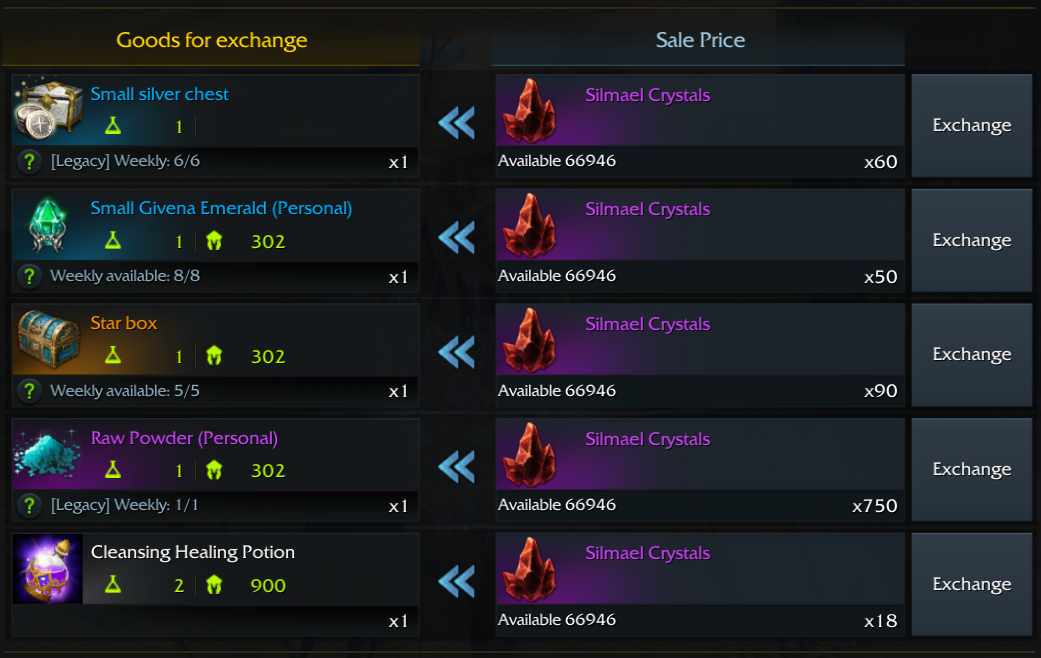 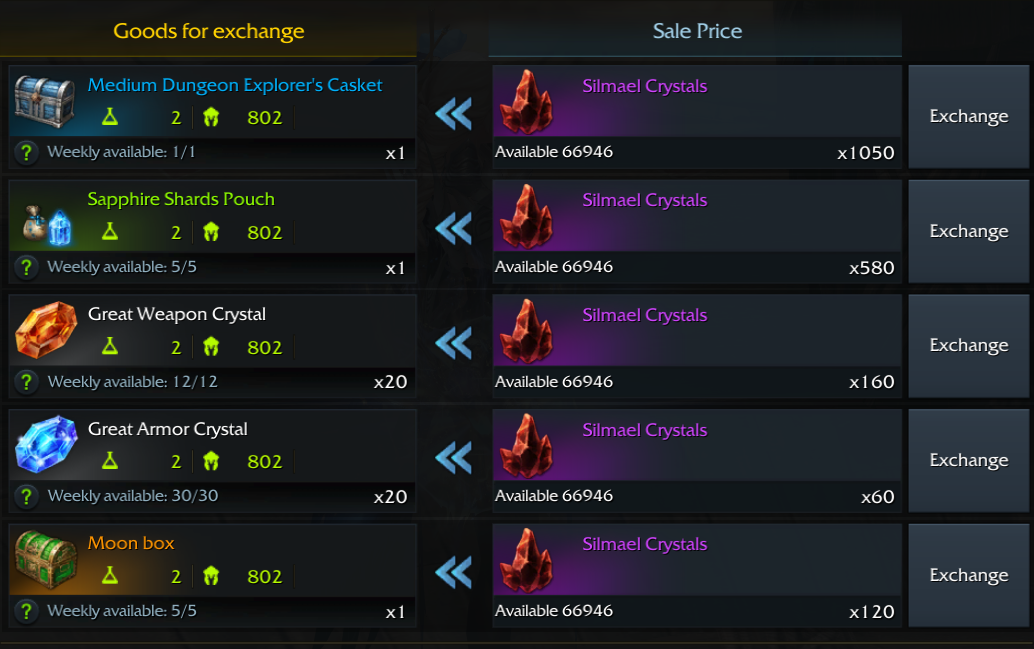 Being part of a guild opens up the path to earn the guild currency, Sylmael Bloodstone. This can be exchanged at the guild merchant for upgrade materials like Destruction Stone Fragment, Guardian Stone Fragment (Bound) and Harmony Leap Stone (Bound). You can also exchange them for Silver Chest, Growth Support Large Combat XP Potion (Bound), North Vern Entrance Ticket Chest, or Rohendel Entrance Ticket Chest.

Another reason to join a guild is the endgame content which requires a party to enter and clear. Besides Guardian Raids, most endgame content require at least a party of 4 players to enter. You can always use Matchmaking to join other random players, but that comes with the risk of failing to clear the content while also wasting resources in terms of used items. Creating a party with friends or guildmates not only increases the chance of success, but also makes future attempts to clear easier as well.

Joining or Creating a Guild 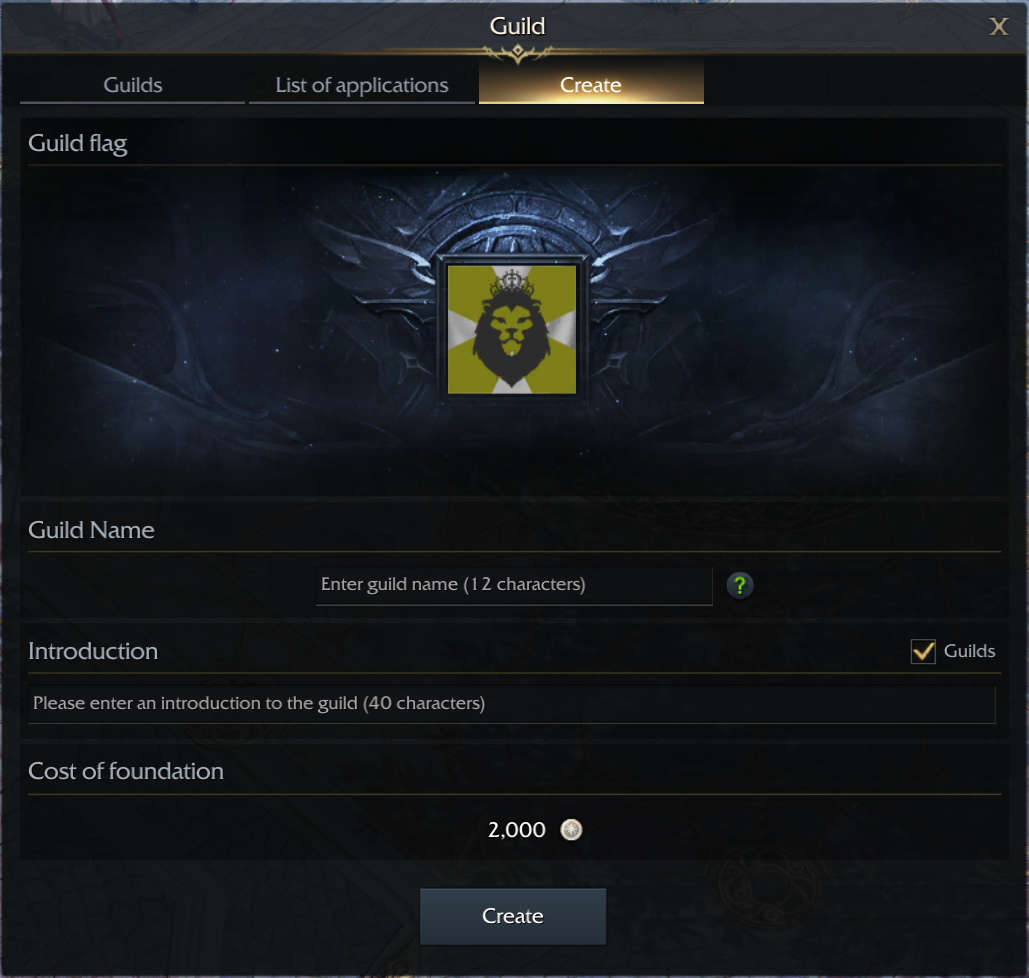 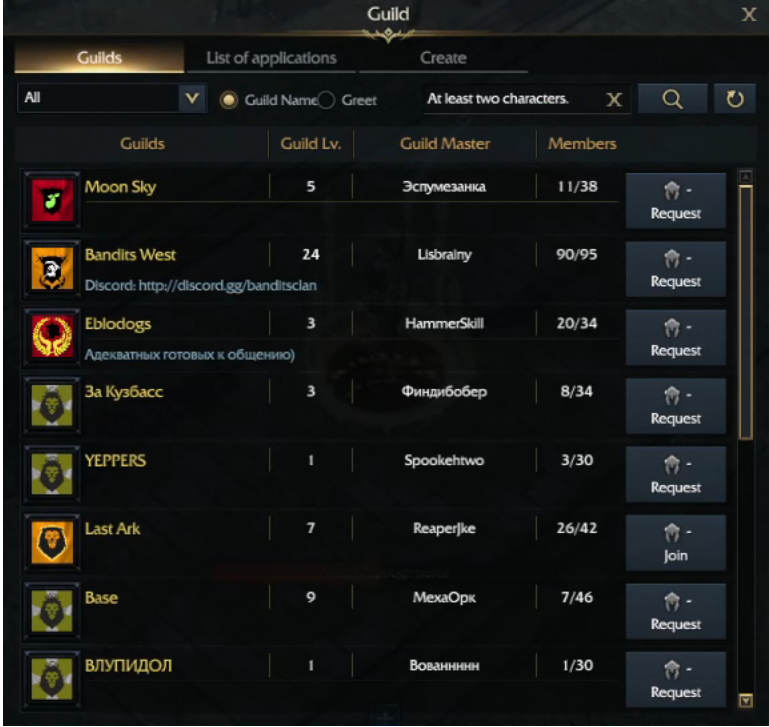 Open the guild interface(ALT + U) to create or join a guild. To create a guild you need to pay a fee of 2000.. To join a guild, simply search for the guild name and send a request to join. The guild leader is able to see all applications and can decide to accept or reject them.

After joining a guild, you are marked with the “newbie” rank for 3 days. During this trial period, your daily

Contribution options are limited, can't accept any guild quests and you won't be able to participate in

Besides from the member rank, the leader can assign 1 deputy and several officers. By more than 10 days of inactivity of the guild leader, the deputy can claim the leader rank for himself.

Here are the permissions for the 2 ranks: 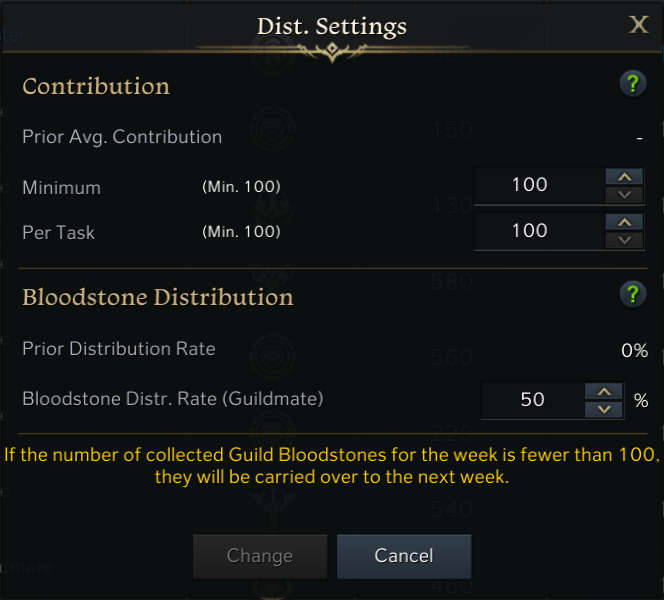 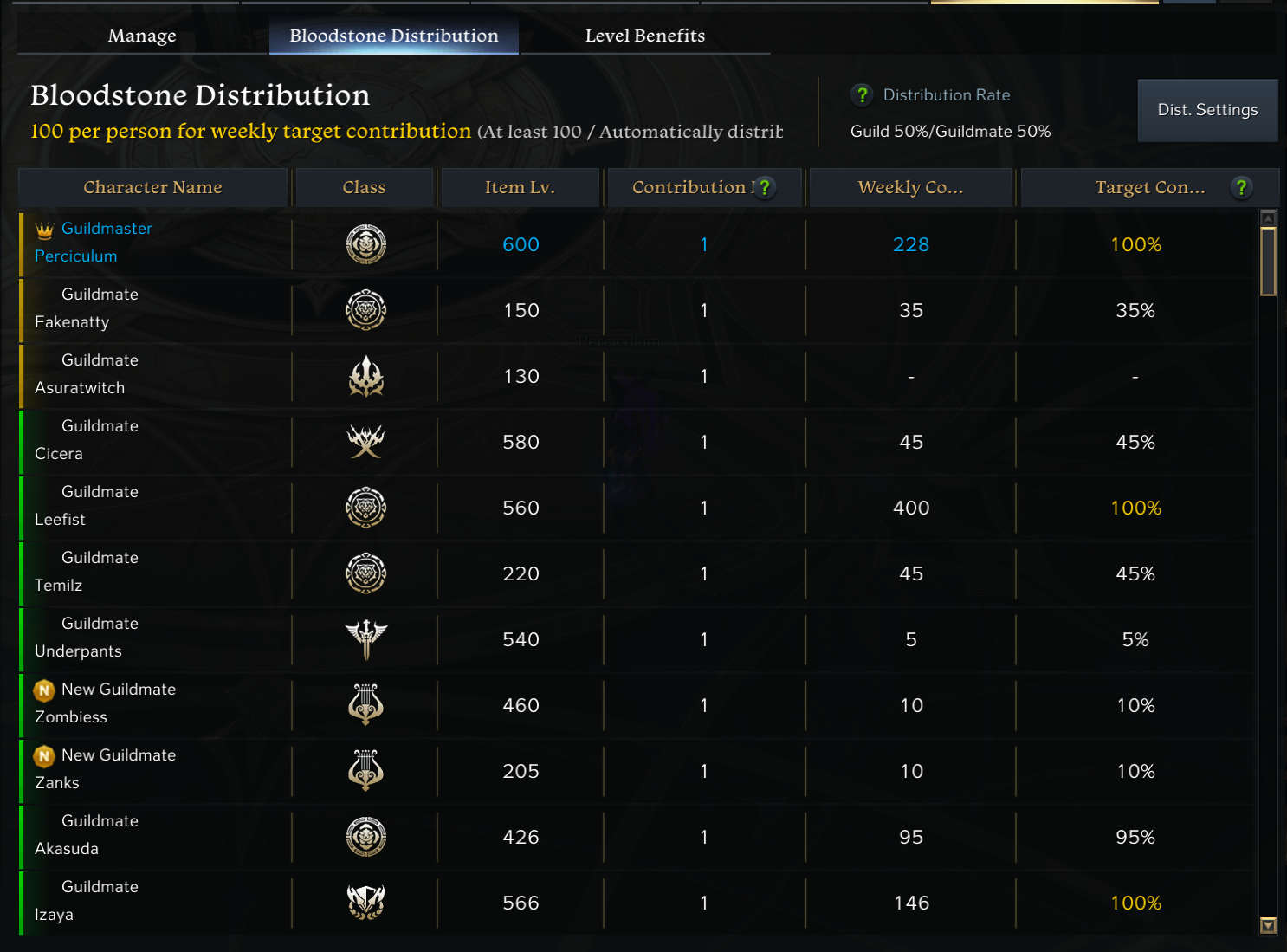 Guild activities are the best way to earn

Guild Experience and Currency. The Guild Activities below accumulate over the entire week a

yellow version of Sylmael Bloodstone. At weekly reset(Wednesday at 10AM), the

Contribution to be eligible to get any Sylmael Bloodstone as a member.

Eg.: The guild leader sets the distribution percentage to 50% Members and 50% Guild Storage. They then set the minimum

Contribution to 500. At weekly reset,

Yellow Bloodstones are converted into Sylmael Bloodstone. 50% of it is allocated to the Guild Storage, the rest can be distributed between guild members who have reached the set minimum

Contribution of 500. How much these guild members get depends on the relation between the weekly

Contribution goal of the guild and the

Contribution amount of each member.

For more accuracy and detailed information, use this formula:

Every weekly reset, the guild leader or deputy can reserve one of the many

GvG islands to contest. This choice should be made based on several factors, because each Island has a different objective, gear limitations and minimum required participants. The higher the rank of the island, the more min maxed the participants needs to be to get a good placement. Higher rank Islands like the

Rank ones have much better rewards than the lower ranked

Rank islands. But be aware, picking an island to contest costs a small amount of Sylmael Bloodstone which gets deducted from the Guild Storage.

The Guild War is held once per week at a fixed time and consists of multiple rounds which decide the final placement. The placement and the rank of the island dictates what rewards the guild earns at weekly reset. Earned Gold is stored in a separate Guild Storage. The guild leader can distribute it between the guild members.

Getting the first place on one of the 2

rank islands unlocks a special feature for the guild leader. The guild leader can set a day and a time within the week to host a server wide event for all players. This event rewards the participants with upgrade materials. The guild hosting the event earns additional gold based on the amount of the participants, which is stored in the Guild Storage at the next Weekly Reset.

Similar to reserving a

GvG island, the guild leader or deputy must reserve an island for

GvE too. Each island is separated into specific tiers based on gear requirements, maximum allowed participants, and unique

Field Boss monster you must slay. Once a

GvE event is registered by the guild leader, the guild has 2 attempts to get the fastest clear time possible. Guilds with the lower clear time will be ranked higher. A major difference between this and

GvG is that you can do it any day and time you want. It is recommended to pick a time when the most guild members are able to participate. The reward your guild gets at Weekly Reset, depends on the rank of the island and your clear time. 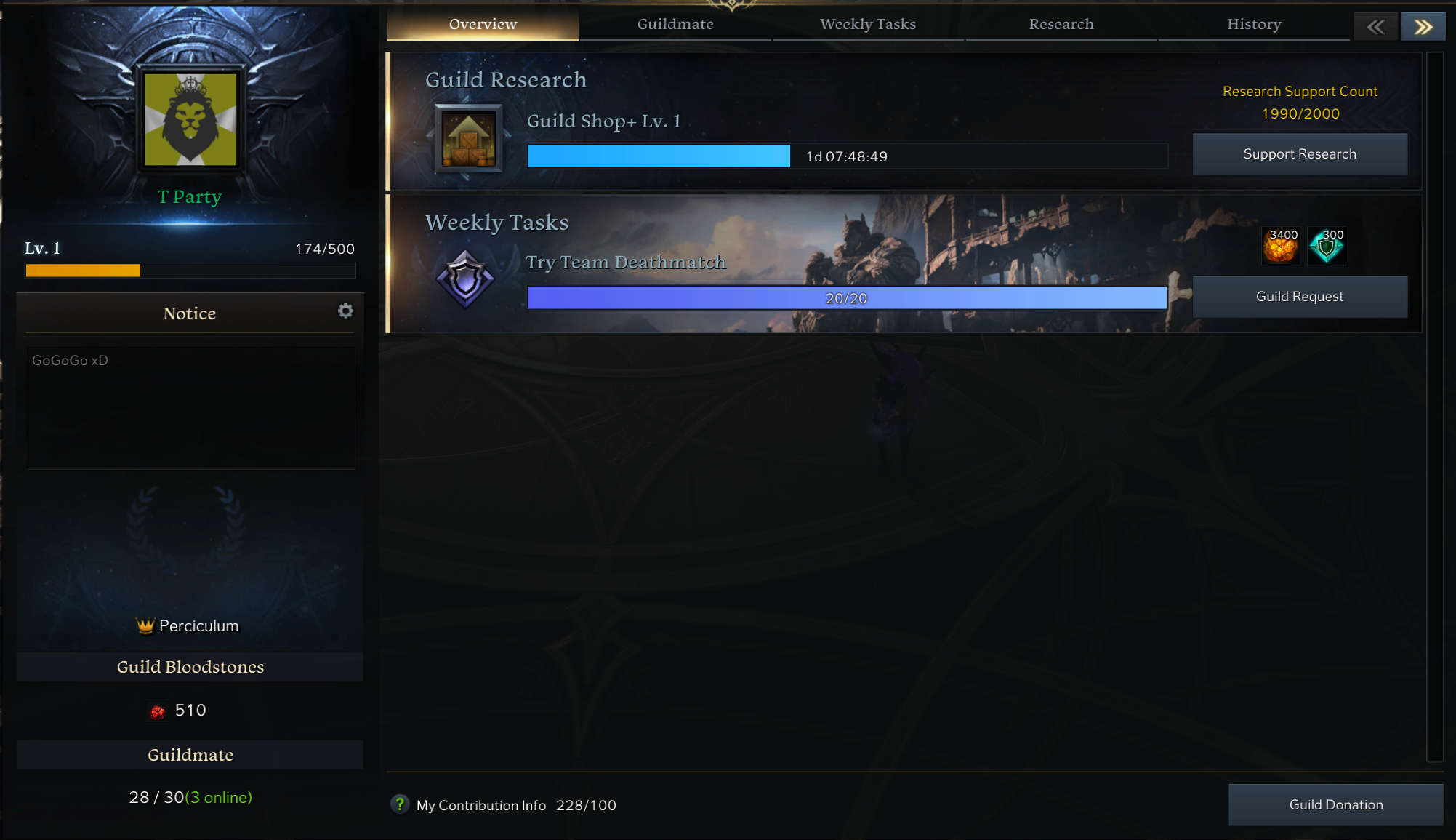 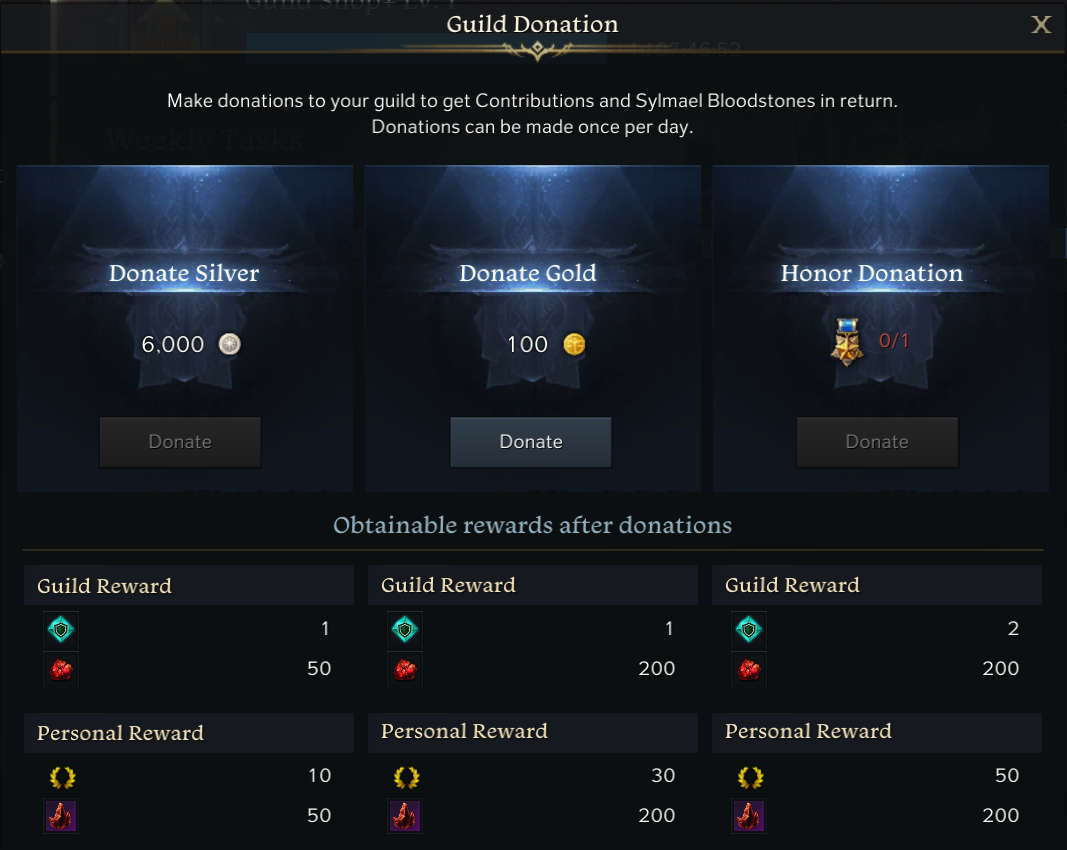 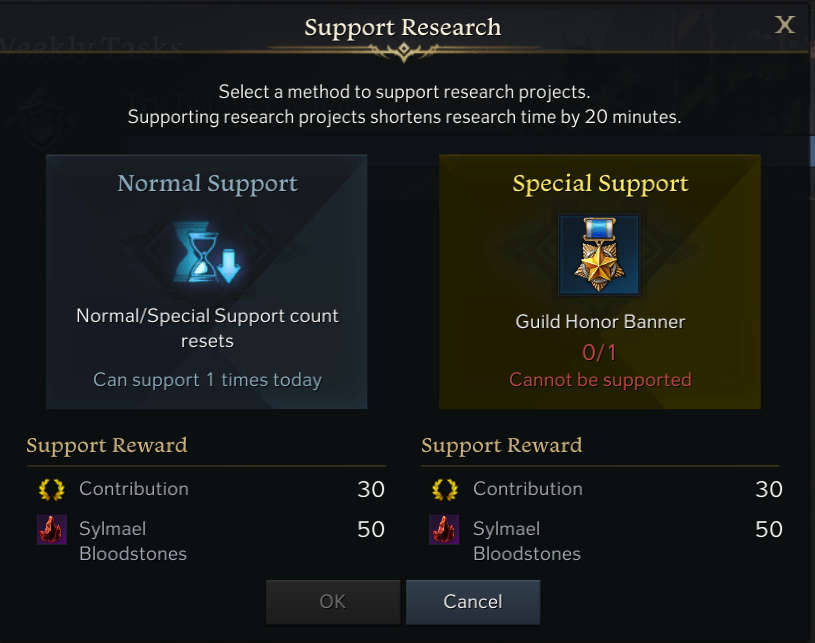 Guild members that are now full-fledge members have 2 options to support the Guild. 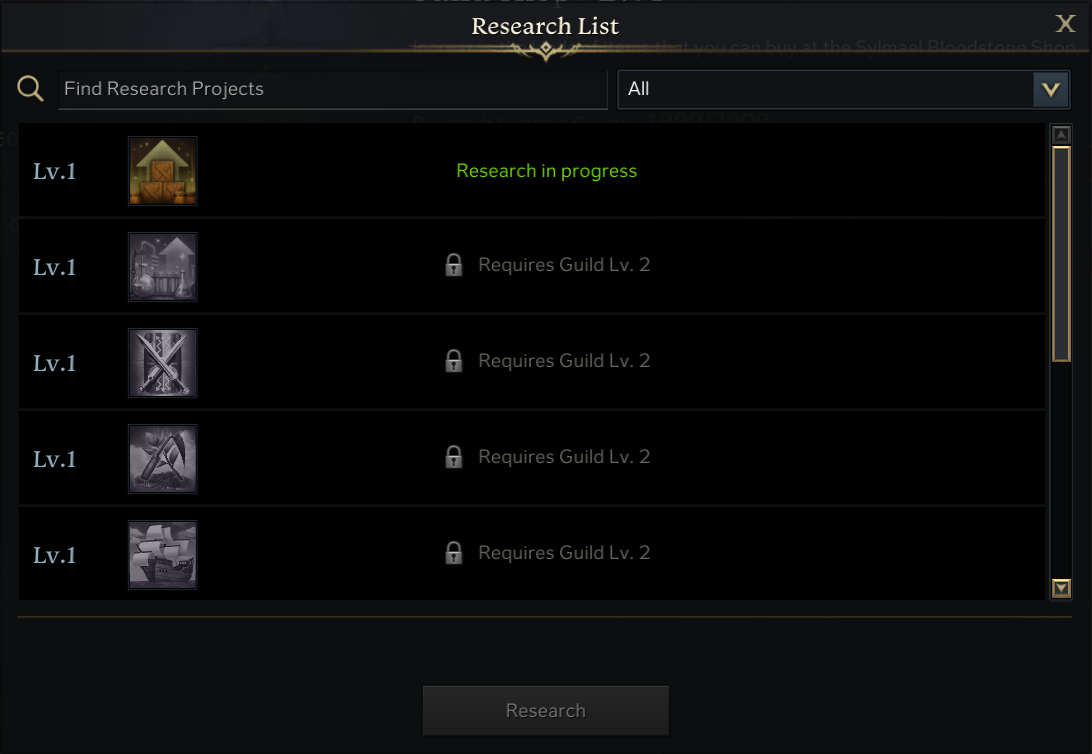 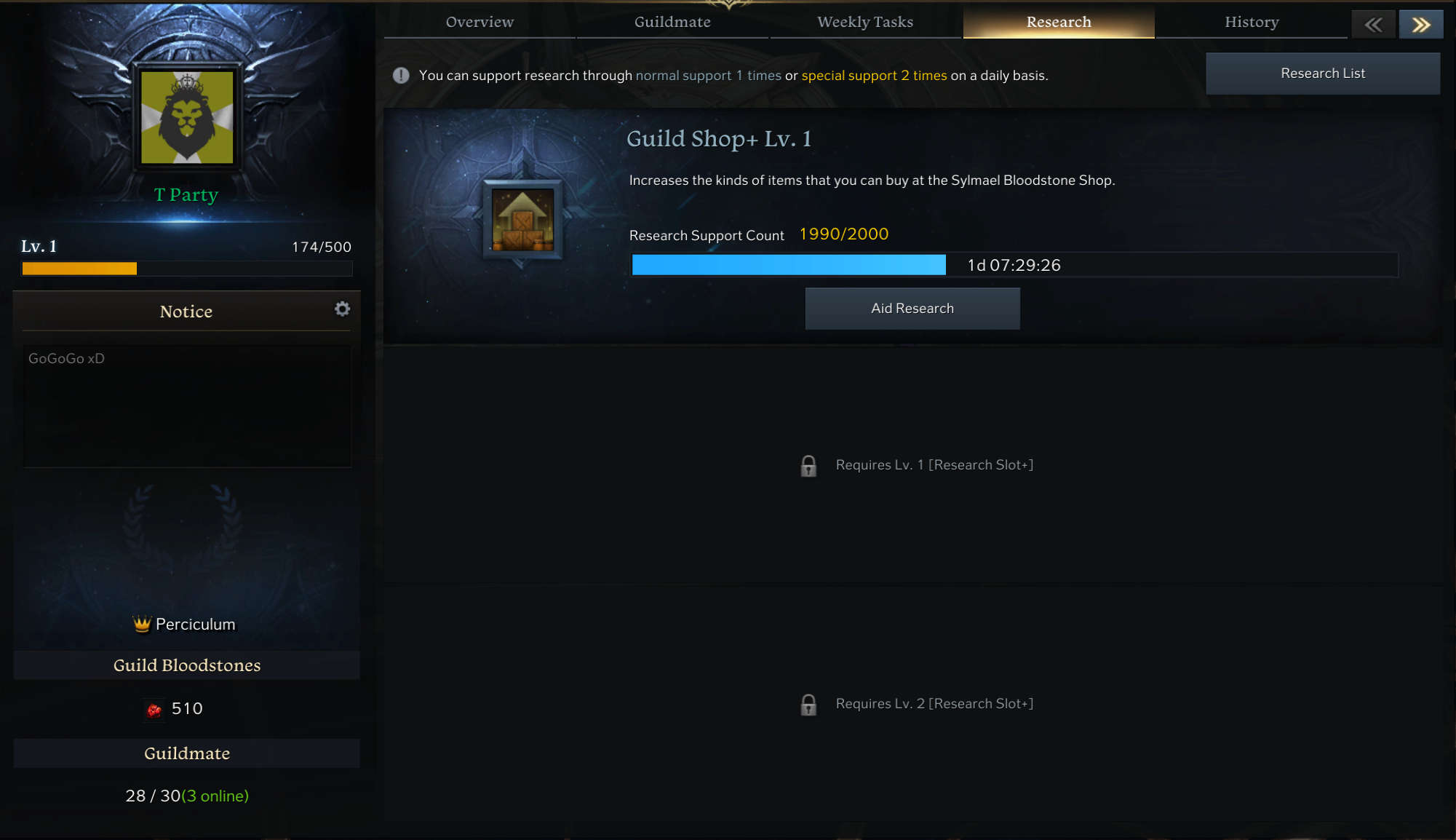 The guild and co leader can start

Guild Research by paying a small amount of Sylmael Bloodstone from the Guild Storage. The time needed to finish research depends on the level of the research. The research time can be shortened by 20 minutes each day by each guild member. 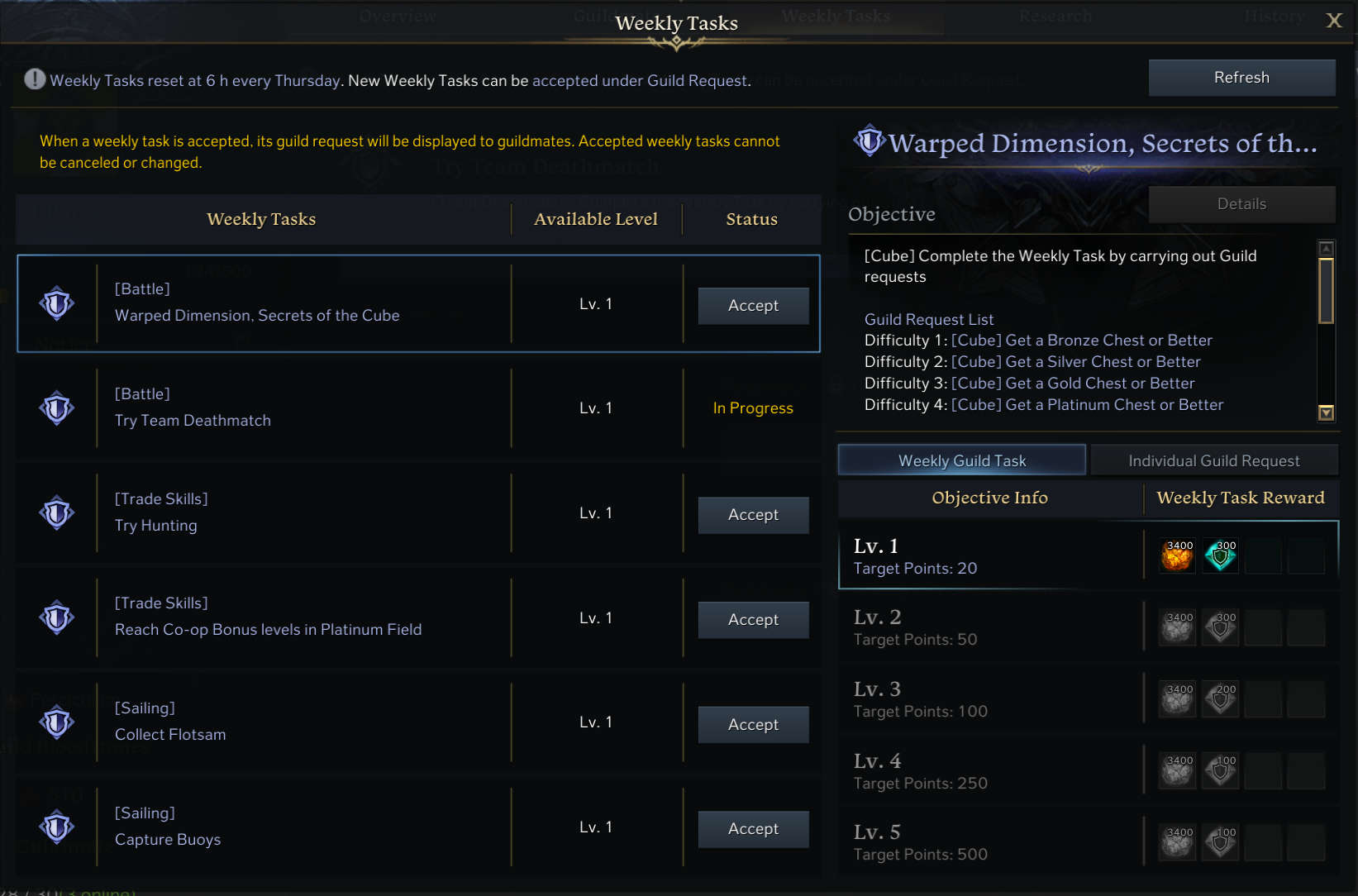 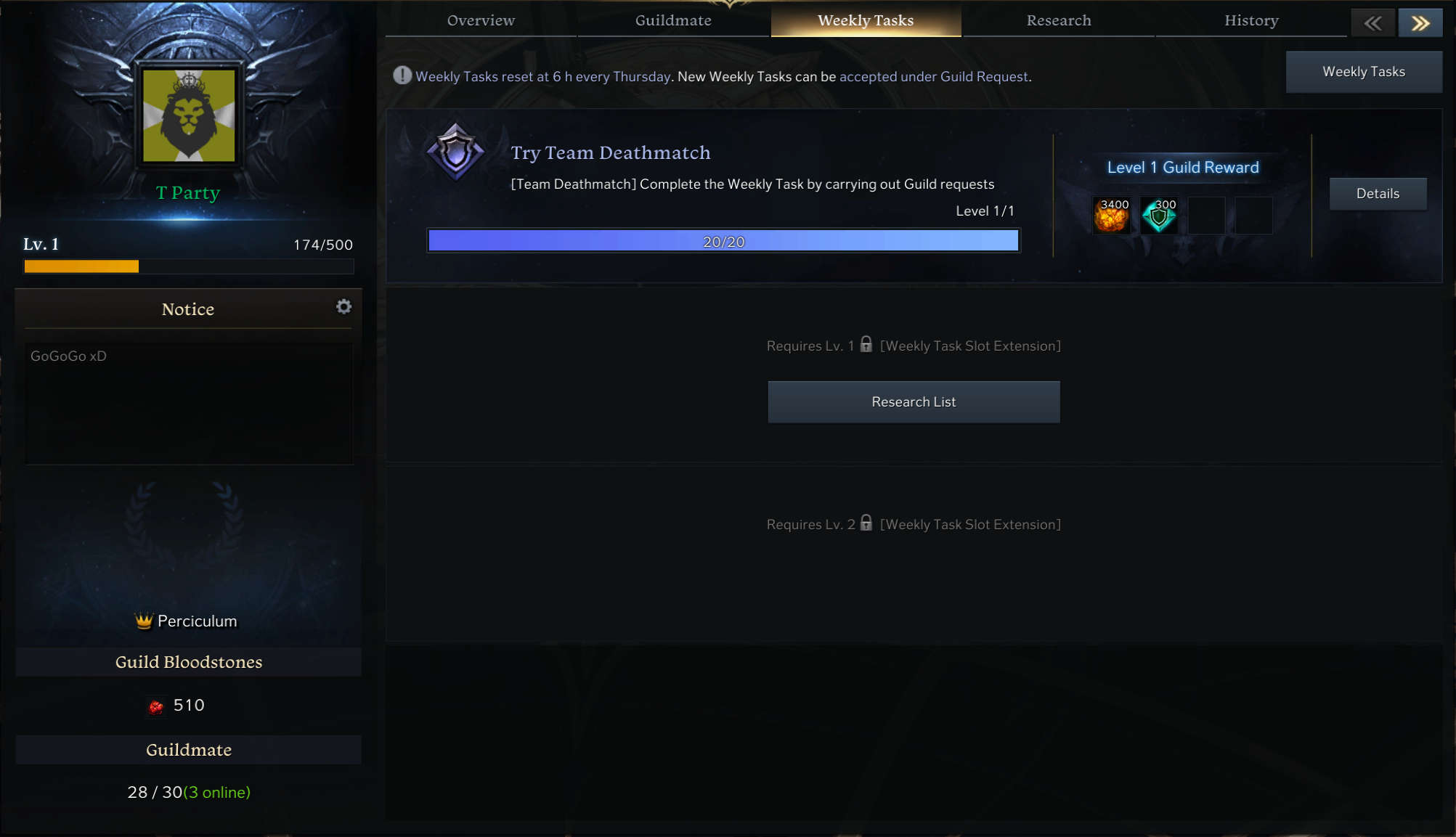 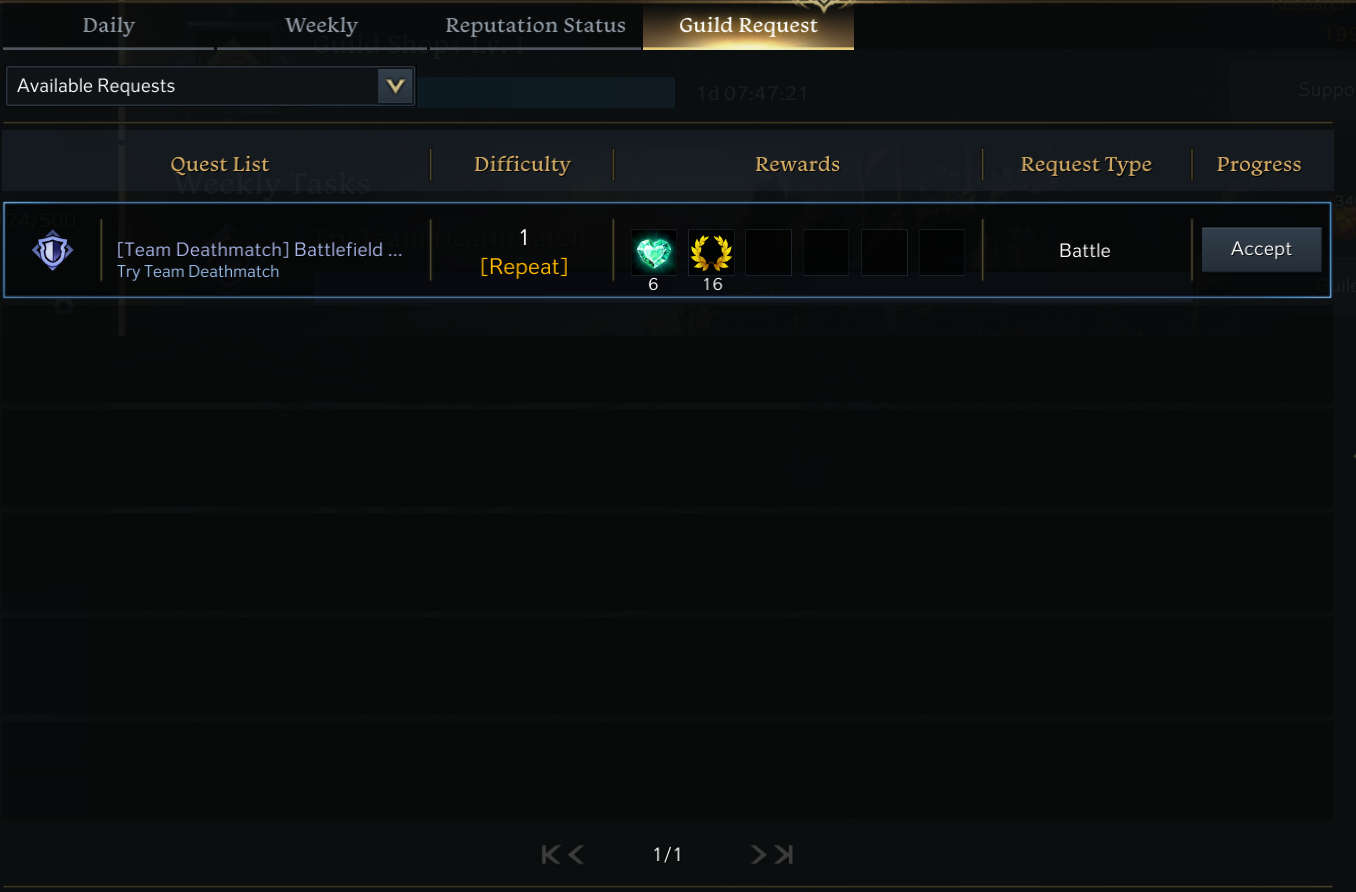 The guild or deputy can choose from a big pool of quests the most suited quests for their guild members. Once selected, it is fixed for an entire week. At the start you can only have 1 active Guild Quest, but by leveling up the guild and through research, you can unlock up to 2 additional Guild Quest slots. The same applies for the Guild Quest pool. There aren't too many you can pick at the start but that can be extended through research. As a guild leader, if you are unhappy with the offered choices of Guild Quest, you can reroll or refresh the list by paying a small amount of Sylmael Bloodstone from the Guild Storage. Be aware, each additional reroll costs more Sylmael Bloodstone.

Once chosen by the guild or co-leader, guild members can accept the Guild Quest(s) in the quest window (Alt + J) under "Guild Request". Upon completion, it rewards guild members with contribution, grants the guild experience points and adds

Yellow Bloodstones to the pool which is transferred into Sylmael Bloodstone at weekly reset. The Guild Quest can be retaken and completed repeatedly. This makes it a great source to reach the weekly

As a guild or co-leader, it is your duty to choose Guild Quests most suited for your members. Eg.: If your guild is a

Every Guild Activity mentioned above contributes towards leveling up the guild. Each level unlocks new researches and extends the maximum guild member limit. A guild with active guild members donating every day, finishing Guild Quests, participating in higher rank

GvE levels up faster than less active and competitive guilds.

Written by Perciculum
Reviewed by Yaen